Here are the results of the recent polls everyone has been voting in. 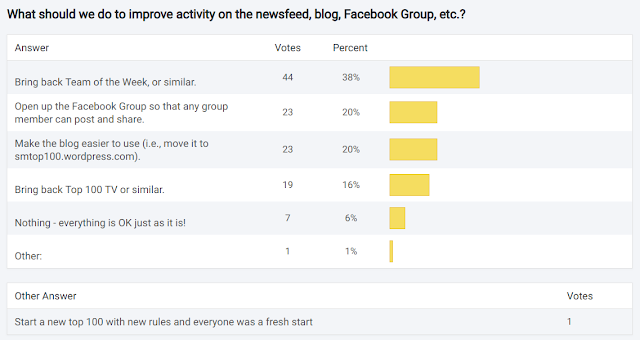 I’ve sent out invites to everyone who contributed original material for the blog here, so that once everyone has accepted their invite, I can import all the posts and pages from here to there and the original authors will still be credited, and can write new posts or pages.

A small majority of managers in favour of losing their jobs on a regular basis!

We may need to think a bit more about how it will work so that we don’t piss off and lose good managers (which would be the opposite of what we want to do), but I think we can try to introduce it and see how it goes, and take it from there.

A clear winner – starting next season, I can change the game world settings to increase the number of automatic sackings at the end of each season from the bottom two in each division to the bottom three.

That will obviously increase the managerial merry-go-round and stimulate the transfer market, which is the intention.

I honestly thought this was going to go the other way, but there’s no consensus for change, so the squad cap will stay at 50.

5. Sanctions for going over 50 players

An overwhelming desire to see increased sanctions for managers going over the 50 player squad cap.

Pleasing to see that sanity prevailed and that the new punishment will be the usual transfer ban, plus having to sell to an external club the player or players that took them over the limit, and not being allowed to re-bid on them.

Surprising result to me, but there’s clearly no appetite to have transfer windows in Top 100 currently.