http://smtop100.blogspot.co.uk/2016/03/italian-manager-mid-season-review.html(Season 2 Italian Manager Review)
http://smtop100.blogspot.co.uk/2015/11/gazzetta-dello-sport-special-italian.html (Season 1 Italian Manager Review)
Following on from the comprehensive review of the Italian managers over the previous two seasons it is now time for the Italian Manager Review season 3. This season Gino Kinnearo has also decided to compare the scores from the previous 2 seasons to see if that manager has shown any improvement.
DP 91 Juventus are as doped up as a non-banned Russian athlete at the Rio Olympics and this is the sole reason for their continued supposed dominance of the better managers that surround them, take Gordon Kinnear for example or David Senior with that Juventus side they’d have come mid-table and they are talented managers yet DP somehow finds an extra gear from somewhere or is it an extra injection? One thing is for certain DP doesn’t give his players Lucozade sport at half-time and yet Frank Hirst stands by and lets this happen – disgraceful.
In addition his continued hounding of every man and his dog in order to strengthen his squad is abysmal he is a homeless man sleeping outside the house of a different manager every evening and then taking his personal helicopter to training each morning. One manager reported 20x missed calls, 15 text messages, 12 messages on fb messenger,  10 emails, 8 tweets, 5 whatsapp messages and 1 voicemail in the space of 1 hour from the horrible excuse of a man – all enquiring for the same player and most were aggressive in nature. 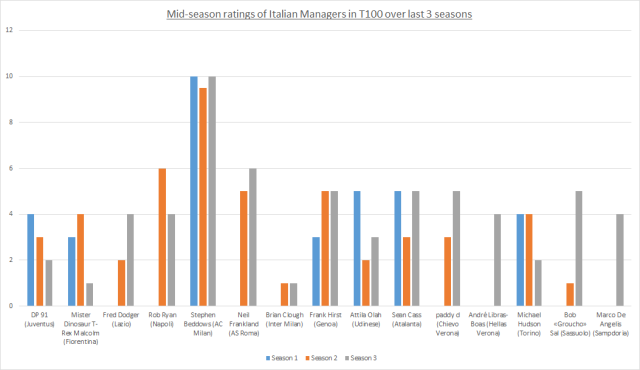