As The T100 Youth Cup enters its 3rd season lets take a look at last nights TOTW and also a breif overview of each group so far.

FYI- Top100 is a Frank Hirst gameworld and has been running for 3 seasons and is without doubt the most active gameworld in SM and possibly the best. The Youth Cup is played on Saturdays with managers obliged to pick an under 21 qualified team and is played in 12 groups of 5. 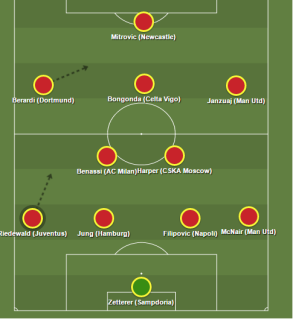 At this early stage all 3 of Liverpool, Gala and A.Madrid can expect to proceed to the knock out stages as they have dominated the group. Poor Feargal clearly is struggling with SMFA duty, Cup, Shield, Youth and World Club Cup and managing a side through 6 different competitions is not ideal.

Gordon Kinnear  (Liverpool) said… “I am actually quite surprised we top the group – I always questioned the validity of pointless friendly competitions as they always used to go against me – but like a good Scot I have no complaints when it is going my way…”
The Doctor (A.Madrid) said… “I still keep time traveling back to season 1 when we won the Youth Cup, we still havent quite got over last seasons shock defeat to Lokomotiv Moscow… but the lads are ready for the next 5 weeks and we aim to win the group.”

Mr David Piero (Tottenham) who is followed home and away by flock of sheep has seen them bleating away in protest at a poor showing by Tottenham in this seasons Youth Cup. The only dutchman loved in Germany Mr Gerrit pulled off a great 1-0 win last night in Monchengladbach to bring the young Germans with a realistic shout of 2nd round youth football with 4 games to go.

Leading the group is non English speaking manager Mr Francesco Signorile (Cruzeiro)… The Lord of the Brazilian rings in Cruzeiro has been a great asset to the gameworld and the results he has achieved with his youngsters to see them top of the group is brilliant.

Noisy (Leverkusen) said: “I am highly shocked that we are not top of the group… and I am sure our quality and QF performance of last season will be replicated as a minimum.”

Roy Keane (Real Madrid) I expected to be top of this group at this stage and the only difficult thing to comprehend is how we dont have maximum points which is down to that cheating Rahul (Aston Villa).

Gary Naylor (Paris SG) has some real superstars in his side but a lack of depth and variety in some positions has led him to having to play certain formations which may well explain his lack of form. Leige’s (Foster) players have been involved in many scnadals this season (see blog) and it is unclear whether or not the Leige youngsters have been involved in Bunga Bunga as well.

Group D is lead so far by the Legend of Greece – surely a little help from the Greek Gods here for McLean as he is driving the Greek train away from a tragic group stage exit.
PSV (Heath Brown) in their Youth Cup debut have done very well, which was expected due to a plethora of talent and Parfitt (Levante) will also be hoping that a fair start will take them through to the next round. Innes (CSKA Moscow) who were excellent last season coming out on top of a difficult group are finding life very tough this season and need to buck up their ideas to make the next round.
This was always going to be a difficult group for West Ham and Chievo Verona – Thomson (West Ham) commutes daily from Canada to training in East London and then likewise to every home and away match and this is clearly having an impact as West Ham struggle to cope with the big boys.

Bayern (Grurisman) was not always convinced of taking part in Youth Cup but he has been won over and the fact that he must face arch nemesis Barcelona (Mckenzie – one of them) in the group stages has clearly motivated him but it is Barcelona who lead the way so far – who themsleves how to right the wrongs of last season when Barcelona failed to even get out of the group.

Schalke (Sameer) will hope that he can get out of the group and get to the QF like last season.

Relegation specialist Josh Mcmilan (Marseille) find himself in an unfamiliar situation with no relegation to  fight in youth football he is stuggling to find the right ways to motivate his players. Feyenoord (Zaid Griffin) is having an excellent debut campaign in Youth football but both should be concerned that Villarreal (Andrew Kelly) (last season semi-finalists) are in 2nd place. Kelly is a managerial genius who gets everything possible out of his players and his mind games will surely ruffle up Feyenoord and Marseille over the coming weeks and we fully expect Kelly to win the group.

As for the bottom both manager openly admit that they are here for the ride and any points that they can take will be much appreciated as they look to give their youngsters regular football.

Bob (Sassuolo) is over the moon at the start his side have achieved in the Youth Cup so far. 4 played ad unbeaten and they beat the other Mckenzie as well. Twente under the leadership of Norman Little, a Little man who started season 2 of SM Top 100 in Div 1, went to Div 4, got sacked and is now in Div 5… He should be hopeful of progressing further into this seasons competition.

West Brom (Deadman) will be confident that he too can take his side onwards as well. As for Dr Fox at Sprting he took on a difficult challenge taking on someone elses side and he will hope to achieve something in the 2nd round of matches.

Group H was the honoary Group of Death when it was drawn out and that has lived to be the case with defending champions Juventus losing TWICE, yes TWICE so far. Reynolds (Dortmund) is so happy with his side at the moment that he has advised any other side in the group to not bother turning up as Dortmund will win anyway.

DP (Juventus) has clearly showed that last seasons success was a fluke and against the bigger sides he has no answers when facing egos as big as his. Poor Everton and Basel are struggling somewhat and will do very well to finish in the Top 3 of the group.

Udinese (Attila) and Milan (Beddows) have been the outstanding teams thus far and barring a complete collapse you would imagine in some order that those two will go through to round two. As for the other 3 perhaps Athletic Club (Crisp) with the talents at his disposal will be highly disappointed. But in truth any of those 3 at the bottom of the group could progress if they can pick up a few wins in the coming weeks.

Boring dinosaur football continues to be a dominating theme in Florence as Fiorentina (Malcolm) continues to bore his way to positive results and tops Group J, a group that he will expect to win. Napoli (Rob Ryan) continues to experiment with different formations and players as he looks for the correct formula and the surprise side is surely Celta (Ryan Chisholm) a failure in his league form and as an International assistant manager alongside his cousin he is picking up good points in the youth cup and finds himself in a decent position.

As for Sao Paulo and Mr Wheels, well the wheels came off in Gameday 1 and he is enjoying the experience but has been warned of his future conduct as his fans continue to attack everyone else with spoons…

Loko are going mad again and have made a fantastic start – last season surprise package and finalists lead the way again. But the Belgian duo Anderlecht (Prince Michael William) and Club Brugge (Davy) are both hot on their heels.

Arguably the biggest disappointment so far has been Newcastle United under Oran Robson they failed to pick up any wins until last night which is horrendous considering last season they won every game of the group stage.

Hamburg (Marsden) are like bread and meat – ham and burgers – they just go together and Mr Marsden has surprised many in leading his Hamburg side to the top of Group L. Sunderland (Bullough) have also done very well, with Man Utd (Joe Jordan) underperforming massively. Frank Hirst though his side might actually do well this season after they won their first ever game (after losing all 8 last season) but since then their form has been comparable with the slide of Gerrards after that slip – surely Genoa won make round 2.