Gino Kinnearo has been a little busy of late, marking the other managers out of 100 for their performances so far, trying to assess the youth cup eligibility of others and speaking daily to Mr President Frank Hirst… but he has never taken his eye away from his beloved Milan and their stunning form under the greatest manager in all of SM Top 100 Stephen Beddows

Milan beat Ryan Chisholm’s poor Celta side in gameday 1 by a score of 5 goals to 0. 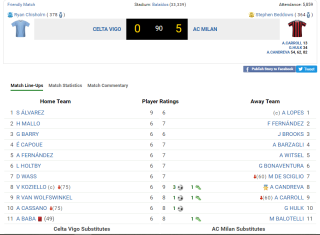 And tonight Gino Kinnearo was more happy than an Irishman in Lille as his beloved Milan kept another clean sheet to make it 6 points out of 6 to stay top of the group which apparently contains the self loving Michael Bowes at Arsenal, a manager who in the opinion of Kinnearo is about as talented as a the Austrian national team manager…

Post match Kinnearo and Beddows could not find the words in either Italian or English to describe Balotelli’s performance which was comparable to that of Robbie Brady’s against Italy – pure class, pure passion, pure brilliance and a performance that left grown men crying in the stadium tonight.
Beddows was questioned whether Rahul was really “Manager of the week” and Beddows laughed… “I am clearly manager of the season so far – who wants to win Manager of the week?” Kinnearo echoed these thoughts with a manager as good as Beddows surely he should be just awarded Manager of the Week in advance every week?
Kinnearo refused to comment on the fact that in Week 1 that despite his (Beddows’) nomination there was clearly some sort of conspiracy against Beddows as he only received 2 votes.
Milan have also made a solid start in Division Two and also in the Youth Cup – next up Inter Milan at home tomorrow. Roy Keane’s brother, Brian Clough, visiting the San Siro. Kinnearo has said that he expects wholesale changes to the side that won tonight as players like Balltelli and De Sciglio are clearly very tired.
Kinnearo also added that he is awaiting the publication of the “World Club Cup Group Tables”
In other news Kinnearo decided some managers who have failed in the World Club Cup tonight and generally so far this season…
Gordon Kinnear (Liverpool) – ironically Gino’s cousion – 1/10 failed so far to inspire his side to achieve anything – anyone would think he is a Scot.
Roy Keane (Real Madrid) – 1/10 Keane’s inability to beat Villarreal (Andrew Kelly) is abysmal – he should be sacked.
Doug Earle (Espanyol) – 1/10 Earle of what? His 0-5 defeat clearly shows he doesnt below in the World Club Cup and should resort to the Youth Cup!
Tom Parfitt (Levante) – 2/10 Another failure – no words can describe how little he has achieved this season!