Connie Lingers Licks up Some Figures on Attendances 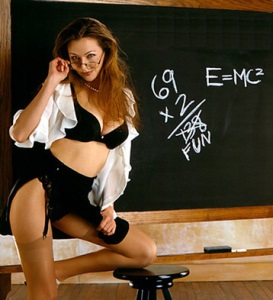 (Connie explaining Einsteins special theory of relativity to Frank in his office)
Thank you David and thank you to T100 for giving me my head on this, I promise I’ll repay the compliment, again. Yes I have been pumping the numbers to suck the facts out of attendances this season in T100’s top flight to see if clubs are getting the numbers of bums on seats their position in the league should warrant.
At just over the half way mark for the season we would expect to see a direct correlation between league position for a club and their average attendance with no great jumps in league position in any given week likely to skew the findings significantly.
Having worked hard on the problem I slid the relevant data into my computer, Deep Throat, and this is what it spat out at me.
The table above shows clubs ordered by the size of their average attendance, that average expressed as a percentage of their capacity, their actual league position and finally the variance of that to their position in this table.
Twenty games into the season we would not expect to see much variance between a clubs position in the league and their position in the attendance table, I love positions don’t you, one day I’ll tell you all about my favourite and it’s effect upon the angle of the dangle, which is directly proportional to the lust of the thrust, but back to the member, I mean matter in hand.
All things being fair (coughs) in the SM Universe only minor deviations would be anticipated to account for a clubs sudden rise or fall in their league position as with A C Milan for whom the gravitational slide towards the black hole of the bottom four sees their attendance standing being above their league position by 2 places.
Things however are far more intriguing at the top end of the table where one would expect to see long time front runners Barca at the top of the attendance table. Not so, they languish an astonishing 5th in the table a deviation of 4 from their league position and are the main victims of what appears to be a faulty code in the SM game engine algorithms, closely followed by Juve who show a 3 place deviation despite their consistent league standing.
The main beneficiaries of this anomaly appear, strangely enough, to be English clubs, with the exception of Liverpool they all rank much higher in the attendance table than their league position warrants with Man Utd having a whopping 5 place variation followed by both Arsenal and Man City with 3, coincidence? SM bias? I’ll let you decide.
That’s all from me for now and thank you for reading, I’m off back to Franks office to explain that the fibonacci spiral is not a ring road in Istanbul.