A Bit About Me

I normally like to do something for the blog when I can, and today I have some free time. Thing is, there isnt too much going on at Levante right now. A couple of strikers will sign for the youth cup at some point today, but otherwise it was a dissapointing start to the season with a predictable 2 – 0 defeat to an Internacional side that I expect to be in the hunt with Genoa, Southampton and West Ham for the automatic promotion spots. We on the other hand are aiming for top 10, despite the chairmans statement that staying up would be enough for him.

So then, in the spirit of Frank’s post a week or so back, and Gino’s regular Thursday blog, I thought that the time was nigh for me to tell you a bit more about myself rather than the character behind the Karl Marx avatar.

Firstly, the reason for Karl Marx is because I was called Marxy at one point amongst our group, solely because I had long hair and a beard. Mine was considerably less grey though, as you can see.

I have a younger brother, and also a younger sister. My sister is getting married in May of this year, over in Italy by Lake Garda. It’s very exciting, and the whole family is very proud and looking forwards to it immensely.

Not the real me

“Marxy” with the kids a few years back

Zoe, much less bearded in the flesh

The two legends, Charlie at the front, Sam behind
I work for a fairly major white goods company, working in their call centre. We povide engineers to go and fix broken washing machines, dishwashers etc. Basically, we are the washing machine version of the AA. I work on the night shift and spend the night in a fairly miserable ofice talking to people who live in Australia.
It’s hardly living the dream, but one of my hobbies is writing. I have written for fun on and off for years, but over the last 12 months or so, I have started writing childrens stories. They are approx 2000 – 3000 words in length each, and aimed loosely at 7 – 10 year olds, with the odd little bit in there for an adult / older sibling who may be sharing them with the younger child.
I have a character who is a duck that solves various crimes. So far I have 6 completed stories, 3 works in progress, and lots of other ideas & characters for other adventures. Now that I have a little collection together, I am startng to look at self publishing them. I dont consider myself Roald Dahl, but a friend of mine who is a signed author himself, although in a completely different genre, feels there is the potential. That gave me a bit of confidence, so as soon as Zoe’s friend comes back with the ilustrations, I will be looking to get them out in the public domain.
Worst case is I dont sell a single copy, but at the end of the day i’d rather try and fail than not try and never know.
I was born in Crawley, right on the doorstep of Gatwick airport, but my parents moved up to Peterborough when I was 18 months old. As a result, I am a Posh fan through and through, and have been going to London Road for years. My first ever game was vs Nottingham Forest at the end of the (I think) 1992 / 93 season. I may be wrong about the year, but I remember Stan Collymore scoring at the London Road end, Forest fans spilling off the glebe terrace and Stuart Pearce trying to usher them back off thepitch, and others climbing the floodlights at the Moyes End to get a better view of their boys. An incredile first game, and I was hooked from that moment.
That first game I went to, I was with 4 of my mates. I dont know what happened to them, but like I say, I found the whole thing intoxicating, and a life long love affair started at that very moment. Of the other 4 though, 2 are now Arsenal fans, 1 is a Chelsea fan, and the other supports Norwich.
As a Posh fan, I have been to some absolute hell holes to watch games. Exeter, Carlisle, Rochdale, Cambridge, Colchester’sold ground, no end of places. It’s the days at those awful grounds that make the cup trips to Villa Park (when Mark Draper scored a magic free kick against us) and White Hart Lane, the play off games at Old Trafford, and seeing the boys in blue win at the old and new Wembley that much more memorable. 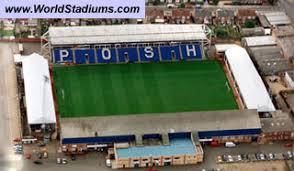 The greatest place on Earth. Dont believe me? Ask Lee Reynolds!
Outside of football, I like most sports. The only ones I struggle with really are tennis and golf. The one I really love though, is motor racing. Not just the Formula One, all of it. I have been to Silverstone for the Grand Prix about 7 times on race day, and about 4 more times for practice. I have also been to most other circuits in England for various events, and in 2014 I headed down to France for the Le Mans 24 hour race. A top weekend, and something I would recomend to absolutely everybody. You dont have to be a petrol head, you can have a great weekend away without seeing a car.
Alongside the motorsport, I also like classic cars. Over the years I have had quite a few, all old Volkswagens of various age and model.They have all been projects, ones that have been mistreated over the years and needed a bit of love to get them back on the road. Getting the spanners out, making a dead car live again is my way of relaxing. I dont have a VW at the moment, but you remember me saying my sister is getting married at the top? Well the fella she is marrying is also a car man, specifically Land Rovers. He had a 1966 model that he kept on some private land and was never going to get around to. The company that owned the land it was on went bust, and the area needed to be cleared. Well, Matt had nowhere to put the car, and I didnt have a project. It was the perfect fit, and I now have this on my driveway.

The other girl in my life
So what else do I do? Well when I’m not at work, being a dad, being a boyfriend, writing, reading or doing something to the Land Rover, I am a big music fan. I dont leave the house without my Ipod, and like to go and see as many gigs as I can. Last year was fairly special as I got to see Paul McCartney, The Who and Paul Weller at various points, along with a few smaller gigs too, so a decent return.
The first gig of 2016 is only about 6 weeks away now. My favourite band of all at the moment are an Australian group called Tame Impala. They are playing at Ally Pally in Feb, and I cant wait. I also have tickets for Stereophonics in Cardiff in the summer, and the Stone Roses in Manchester too, so its already shaping up to be another belter. Speaking of the Roses tickets, I have 2 Wednesday tickets. If somebody reading this wants to swap for a coupld of Saturday tickets they might have, drop me a line. Please!!!
I’m also hoping Lana Del Ray comes over this year. An incredible talent I think, a real haunting voice, beautiful lyrics, and a beautiful girl too. Right at the top of my list with Fearne Cotton and Kemi Majeks from Milkshake.

Lana                                           Fearne                                          Kemi
Hopefully Zoe doesnt loot at this!
I guess being the Top 100 Soccer Manager blog, I ought to talk about it for a few minutes. I have been playing since December 2010, and been a Gold member since December 2011. I started playing in small leagues, and after a fairly short while, I have small clubs with strong squads challanging for and regularly winning trophies. After a while though, winning against a computer a two or three others gets a bit dull, so I ended up in the Ashclowbel. It’s a really tough league with a 100% take up and lots of competitive sides. At the end of last season I finally won my first Ash trophy. Mr Beddows also featured in the final, and after some great banter during the week leading up to it, with some excellent work on the Ash Facebookpage, my Spurs side put Stephen’s Porto out of their misery with a big 5 – 0 (I believe) win.
As soon as I was offered the chance top play in another league like that by Frank, I grabbed the opportunity.
Levante are a fairly poor side at the moment, and I was offered the Bayern Munich job a while back. I did consider it, but looking at my love of Peterborough, and fixing up old cars rather than buying a shiny one, you can guess why I decided to stick. One day i’d like to have a squad like Bayerns at Levante. I may never have that, but the effort of trying, and the satisfaction if I can do it, make this much more interesting to me than taking up a ready made trophy collecting side. Horses for courses though, and I can 100% understand anybody who wants to take the ready made route.
Well I guess i’ll stop boring you all now, but if my stories do come to something, then just remember you read my first effort at an autobiography here 🙂